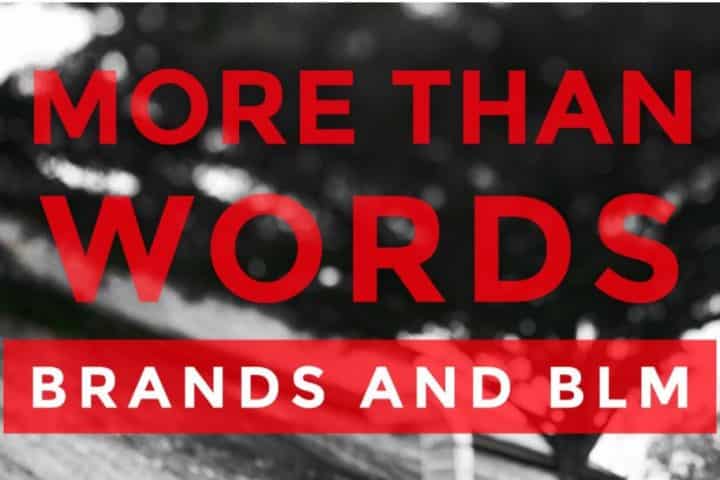 Brands across the world are coming out and supporting the Black community. Here are some noteworthy ones that stand out to us because they are taking real action for real change — beyond the platitudes of social posts and donations. While some have been advocates for Black lives for a while, others are stepping up their game. These brands have made it clear that they are a part of social change for the long-run, long after #BlackLivesMatter is trending on social media.

Ben and Jerry’s are firm believers that what a company makes or sells isn’t the point. Co-founder Ben Cohen said in a statement, “business is the most powerful force in our society. The only way that we are going to deal with the problems that are confronting us is for business to get involved.”

Ben and Jerry’s have been respected by brands and advocates alike for their powerful statements on racial injustice and inequality. In fact, Ben and Jerry’s have a proven track record of supporting racial injustice overtime; they have been outspoken supporters of the Black Lives Matter movement since 2016. Over the past few years, they have released several informative articles to educate audiences and address social issues head-on, including  Why Black Lives Matter, 7 ways we know systemic racism is real, and front-end criminal justice reform. Last year, they created the Justice Remix’d flavor to bring awareness to criminal justice reform and structural racism. Ben and Jerry’s is at the top of our list, as authentic brand drivers of change.

Boots on the Ground and Long-Term Commitments

Although having a history of standing against racism and inequality, Clorox CEO and Chair Benno Dorer admitted that the company needs to do more. Having origins in Atlanta and Oakland, the cleaning goods company has spent years giving back to their communities with an emphasis on K-12 education, STEM programs, literacy and leadership programs, and urban farming. According to their website, they are now donating $2.5 million to focus on three things: supporting Black communities impacted by recent events, engaging Black youth, and accelerating Black community access to criminal justice reform.

Clorox is taking action internally as well. Every Clorox executive has pledged to volunteer with organizations combating inequality and injustice. They are also increasing their spending in minority and women-owned businesses, initiatives that address conscious and unconscious bias, as well as increasing their recruiting focus on underserved communities.

T.J. Maxx, Marshalls, HomeGoods, Sierra, and Homesense, subsidiaries of TJX companies, collectively released a statement that they will be growing a more inclusive and diverse organization at all levels, ensuring management opportunities are accessible to Black talent. To support their long-term commitment to diversity and inclusion, the department store conglomerate is assembling a global team of diverse advocates to help determine actions and next steps that will help keep the company focused on the need for social change. In addition, TJX companies are donating $10 million over two years to global organizations that combat racial injustice and systemic racism.

Netflix recently launched a Black Lives Matter tab in its genres section. When logging into the streaming platform, the site reads “More Than a Moment” before users can click to watch their movies. Netflix declared “when we say ‘Black Lives Matter,’ we also mean ‘Black storytelling matters.’ With an understanding that our commitment to true, systemic change will take time — we’re starting by highlighting powerful and complex narratives about the Black experience.” As one of the largest entertainment services in the world with over 180 million subscribers, they have made an incredibly impactful and wide-reaching call-to-action across the world for users to educate themselves on Black narratives.

Macro-influencers and celebrities have been utilizing their personal brands on Instagram to empower Black female leaders to tell their story, with the #ShareTheMicNow campaign. 46 Black women are taking over the Instagram account of 46 famous white women (and counting) for 24 hours so that Black female voices can be better heard. Celebrity participants include Julia Roberts, Kourtney Kardashian, and Gweneth Paltrow. Some of the women taking over the accounts include #MeToo founder Tarana Burke, transgender rights activist Angelica Ross, and president of Planned Parenthood Alexis McGill Johnson.

Babynames.com changed their homepage from their usual name rankings and images of babies to display an extensive list of names belonging to Black Americans that have lost their lives to enforcement or civilians. The website simply reads, “each of these names was somebody’s baby.” Although the message from the website is unexpected, the company is raising awareness of the Black Lives Matter movement in a powerful way, by helping humanize the tragedies of Black Americans that all too often are forgotten.

Lego has an immense significance in children’s education and entertainment. To play their part in the Black Lives Matter movement, Lego is donating $4 million to organizations dedicated to supporting Black children and educating all children about racial inequality. Acknowledging that symbols have meaning, they are also removing any collections that include police characters, including the White House. By calling attention to the fact that education systems need reform just as law enforcement does, Lego is making an impactful contribution to the social movement.

Sesame street teamed up with CNN to co-host a program called “Standing Up to Racism” to discuss the issue of racism with children watching at home. Moderated by CNN’s Van Jones and Erica Hall, alongside the Sesame street character Big Bird, experts conversed with characters from the popular children’s show including Elmo, Abby Cadabby, and Rosita, to answer questions submitted by families watching.

Change is not easy, and there is still a long way for America to go. However, we have faith in the power of brands and businesses to make the lasting change necessary for a more inclusive, equitable society where Blacks can not merely matter, but flourish.